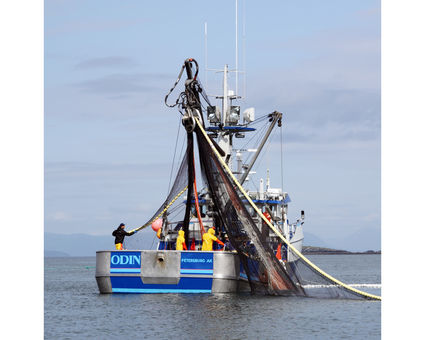 The crew of the F/V Odin hauling a seine set.

Dave Ohmer presented his annual end of the season fishing report to the Petersburg Rotary Club last week and his comments mirrored statewide reports and comments made by Gunnar Knapp, longtime fishing economist at the University of Alaska.

Chile, the world’s number two producer of salmon had to get back into the market after killing off their farmed fish stocks due to disease problems for the past three years.

“They rebuilt their stocks quickly and sold their product to Japan,” said Ohmer. “To drive sales, they continually reduced prices on salmon and actually pushed prices so low that they were actually selling salmon at less than it cost to produce, causing them to restructure loans.”

That cheap fish from Chile made it harder for processors to sell their inventories of salmon in the U.S. and other countries, said Ohmer.

Chum salmon prices also dropped, according to Ohmer, but with a shortage of roe throughout the world, the demand for roe products like Ikura jumped significantly.

That fact, noted Ohmer, is what turned a doubtful fishing year into a solid one for most gillnetters and seiners.

“The tremendous volume of chums this year offset just about everything else and gave people a good year. Seiners had an incredible season,” Ohmer said.

“ADF&G records show that top seiners were able to gross more than $500,000 this season. It sounds like a lot of money, but remember, they need about $350,000 annual gross income to pay the bills, pay the crew and maintain the boat,” Ohmer said.

Gillnetters are the last people fishing before the stocks get to the streams. “They had an extremely good year. This was probably the best gillnet year ever,” according to Ohmer.

Gillnetters on average saw gross stocks jump over 20%. All this is based on chum salmon and the value of the roe this year, Ohmer noted.

The chums were a disappointment for trollers because when they came through traditional troll areas they didn’t bite because they were totally full from eating in the ocean. They swam right by the troll hooks, it appears.

This was projected to be a bad year for salmon with 17 million pinks expected coming back to Southeast. Last year 59 million pinks showed up. This year 20 million came back to SE waters.

This year 1.6 million fish came back into the northern Southeast fishing areas whereas last year 40 million pinks returned there.

“There was 20 times less fish in 2012 in areas north of Petersburg,” Ohmer said.

Statewide, Kings didn’t show and it was not a very good year for sockeyes in SE, said Ohmer. Coho returns were about average, according to Ohmer, “but it didn’t feel like an average year. Cohos never do,” he noted.

“It had the potential to be a very negative year,” Ohmer said, “but the chum salmon came through for us fantastically.”

Ohmer reported the American fresh fish markets are taking more and more fresh fish at higher prices, “There is presently a screaming demand for fresh cohos at good prices. 100% of our freshable cohos are shipped south.”

Ohmer briefly reported on the longline market where he said, there is so much cheap fish in Japan it’s affected prices for halibut and black cod.

“We have pushed these prices up where all the value of halibut is going to the fisherman. It’s a good thing, because they have taken big quota cuts,” Ohmer noted.

Volumes are down, but people want to eat halibut. Dockside prices are holding steady at the mid-$6 range.

Prices of black cod are dropping and wholesalers, who paid higher prices for black cod at the beginning of the year, cannot sell their product.

“Chances are we’re not going to sell this product until spring of next year,” Ohmer explained.

In conclusion, “It was a good solid year, not a great year for fishermen,” Ohmer noted.