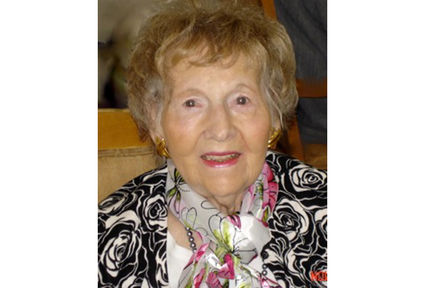 Born November 1, 1915, Billie was the last living member of a family of 13 children. She was born in Alger, Wash. to German immigrant parents who ran a small logging and saw mill operation on their rural property. Life was not easy for this large family. Billie attended a small country elementary school, but had to move to nearby Bellingham to board with friends and relatives in order to attend high school. She graduated from Burlington High School in 1933.

Following graduation, Billie worked in department stores and a dental office in Bellingham and at Boeing in Seattle. She returned to Bellingham where she met and married Jim Taylor, of Blaine, Wash. in 1942. In 1945 she and infant daughter Lynda made the trip to Petersburg to join Jim, where he was stationed with the US Army Signal Corps (ACS). They made Petersburg their home for 53 years.

Although her heritage was not Scandinavian, Billie embraced life in Petersburg and in time adopted the life style centered around local traditions and customs. And like many housewives, she liked being involved and worked summers at PFI when help was needed. One summer she was able to earn enough to purchase their first used car.

Her greatest enjoyment came from being a homemaker and raising two daughters. In later years she and Jim were able to enjoy travels to Southeast Asia, the Mediterranean, Europe and the East Coast. Jim’s association with National Bank of Alaska took them to Anchorage frequently, as well as to many other areas of the state.

Billie left Petersburg in 1998 and relocated to Bellevue, Wash. and later to Poulsbo, Wash. to be near daughter Tammie and family. The last five years of her life were spent in Salem, Ore. near daughter Lynda and family where she lived at Southern Hills Assisted Living and Forget-Me-Not adult foster care.

Private services will be held at a later date.