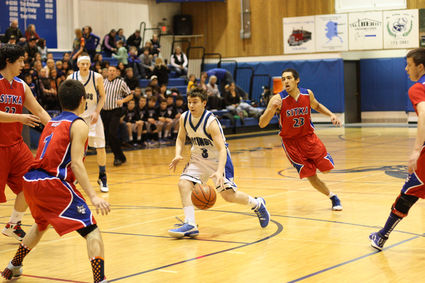 Point guard Michael Brock, one of the Vikings’ leading scorers, looking for a hole in the Sitka half court defense.

The Petersburg Vikings hosted the Sitka Wolves for a two game fight but didn't come out the victors.

“I thought we made some progress this week in a couple of areas and our intensity level was better than it was last weekend against Mt. Edgecumbe,” Head Coach Rick Brock said. “I believe also that, physically, we competed against a team that was much bigger than us but we continue to struggle putting the ball in the basket.”

Brock explained that both nights the Vikings had good shots that they would typically make but just would not go in.

“When that happens, it's hard to keep posi...