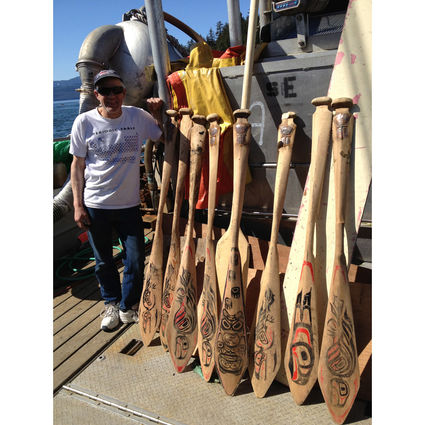 Jeff Erickson, along with four of his crew members scavenged the beach along Seymour Canal for three days and found the lost canoe paddles of the One People Canoe Society. Shown here is Erickson with the hand-carved cedar paddles that were returned to Juneau by way of the Fish and Game Research Vessel Media.

Members of the One People Canoe Society lost several of their canoe paddles, along with other equipment, as they made their way to Wrangell to participate in the rededication of Chief Shakes House.

The canoers ran into bad weather in the Seymour Canal area and were forced to move from the canoes to a larger vessel. During this move, several of the canoes were overturned in the water and many pieces of equipment were lost to the choppy waters.

“I heard the story and was familiar with the area. It is a very difficult area to get to and it has a high density of brown bear so it can be pretty dangerous,” Jeff Erickson said. “I had a really good feeling that I knew just where those paddles could be found.”

Erickson and four members of his crew; Ken Madsen, Kurt Kivisto, Tim Kivisto and Ian McCallum, were able to find the beach and began searching for the missing paddles.

“We got to the beach around 5 a.m. and quickly found a seat cushion and a life jacket,” Erickson said. “I was sure we were in the right place and then we found four of the lost paddles.”

According to Erickson, it was a special moment when they found the first paddles.

“I could tell these were special paddles,” he stated. “They were hand-carved cedar paddles and I knew I was looking at something unique.”

Erickson and crew spent three days scouring the beach and found 24 paddles along with several of the missing seat cushions and life jackets.

“We placed the paddles and equipment on the Fish and Game Research Vessel Media for them to be returned to the members of the Society,” Erickson said. “It felt really great to be able to find them and get them returned to their owners.”

Erickson also explained that he has been going to those beaches for about 20 years and has found many things, but those paddles were, by far, the best things he had found there.

“We were lucky that the weather was good and held out long enough for us to find them,” he stated. “I am proud to have been a part of this. It may not have been a spiritual experience, but it was definitely special.”