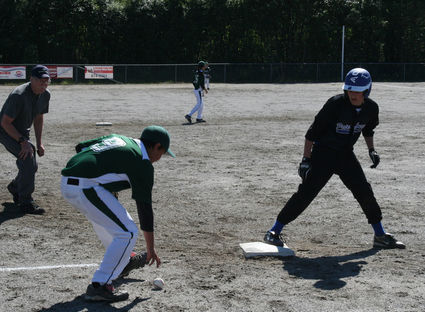 Ryan Wallace (10) took third base on a steal after an error by a Prince of Wales player. Wallace scored the first run of the tournament for Petersburg.

WRANGELL — Youth baseball came to Wrangell in a big way last weekend as the 2013 All-Stars tournament for Southeast Alaska kicked off at the diamonds near the Nature Trail.

Coach Glenn Smith said hosting the tournament in Wrangell was good for the nearly 100 players, visiting families, and the local community. 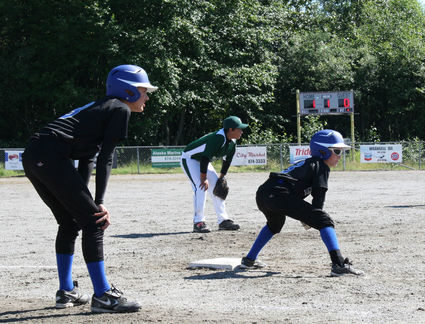 Petersburg’s Andrew Weller waits for his chance to leave third base as teammate Adam Ware looks on.

“One of the things I like about the tournament being here in Wrangell is that it gives us an opportunity to be a good host to parents and players from Southeast,” Smith said. “Even though there are three other cities in Southeast that are also well qualified to host a tournament like this, for our kids it’s good to see that we were picked and for them to get to play against the best kids picked from other town’s teams. It’s great for the community as well because we have put a lot of work into the ball field out there. There has been a multitude of folks that have helped us get it ready.”

Juneau’s team, the Gastineau Channel Little League Majors, easily came out in the front of the pack last year as they blanked all other competitors to move on to the competition in San Bernardino, though they did not advance at that event.