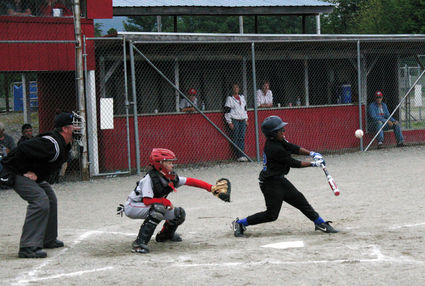 Petersburg’s Sawyer Bryner hits for a single on Thursday night against Wrangell.

The final showdown of play at the 2013 Region II All-Stars Little League tournament in Wrangell culminated on Thursday night as the home team took on – and came close to beating – perennial rival Petersburg.

For two innings the Wrangell team either led or were tied with their competition from the north, though the team stayed in until the very end, losing only by a 3-1 score in the sixth inning.

Petersburg scored first on a stolen base by Stone Morgan. Dillon Rooney scored the first and only run for Wrangell.

“The tournament was a lot of fun for us,” Baird said. “Our first game was against POW and we came out and played hard and were really jazzed. We won that game and then had a tough battle against Sitka, as well as Ketchikan. In the Juneau game we held them, but in the top of the fifth inning, they scored a whole bunch of runs on us and we could not recover.”

Baird added that her team did recover against Wrangell, however.

“This was, by far, our best game,” she said. “All the kids had fun at this tournament.”

Morgan took an in-the-park homerun against Wrangell in the fifth inning for the go-ahead score to give his team the lead. He said he was elated after making the run.

“I felt really good after I hit that homerun,” Morgan said. “My team got all pumped and it was an amazing feeling. This has been a cool tournament and the best part has been our hitting, pitching, everything.”

Morgan was able to score the homer after a series of three ball-handling errors by Wrangell let him run the diamond and take a 2-1 lead. A follow-up triple, which led to the winning score, came next off the bat of Petersburg’s Sawyer Bryner.

Wrangell coach Glenn Smith said his team played hard and kept in the game until the very end.

“I think that, all in all, it was a low-scoring game that we stayed in well until the fifth,” Smith said. “We lost composure there in the last inning and the errors killed us, giving them three runs.”

After the game, two Wrangell players said they had a good time even though they did not advance in the competition.

Tymon Teat, the starting pitcher for Wrangell said even though his team did not come out victorious, he enjoyed playing the game with his teammates.

“They started hitting it better in the fifth and we weren’t really grounding or getting the ball back to first that well,” Teat said. “Even though we did not win, playing all the games was a lot of fun.”