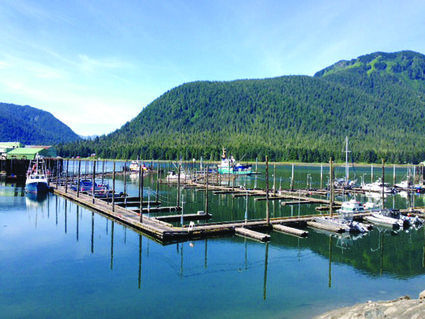 This week’s view of the emptying North Harbor.

Boaters mooring their vessels in Petersburg’s North Boat Harbor had to clear out by August 1 in preparation for the harbor dredging and reconstruction project.

Harbormaster Glorianne Wollen says the first phase of the process will be to remove the harbor’s floats and pilings. The Army Corps of Engineers contracted out to Sitka’s S&S General Contractors to dredge the North Harbor along with the basin in front of Ocean Beauty Seafoods and Icicle Seafoods.

Dredging is scheduled to begin September 1.

Wollen said the project is 20 years in the making but they’ve been working on moving North Harbor boats into the South Harbor since last winter. Because the South Harbor is filling up Wollen says there isn’t much room for new customers who want permanent spots at the moment, but because the harbor’s fleet is mostly commercial, it’s able to temporarily rent spots.

“It’s an asset for us to be able to tie up the visitor,” Wollen said. “We know that Sunday through Tuesday or Wednesday we’ll have quite a few empty stalls that we can hot berth, or sublet, to visitors. That’s a real nice sideline of our business here.”

In 2006, the Alaska Department of Transportation transferred the North Harbor to Petersburg. It’s now up to the borough to pay for the harbor’s reconstruction, an estimated cost of $8 million. Petersburg Borough put up $3.5 million. It’s drawn most of those dollars from harbor revenue, the raw fish tax and the power and light budget.

“It was cobbled together any way we could to get enough money to do the project,” Wollen said.

The state is picking up the rest of the tab with a matching $3.5 million grant.

Wollen says the grand reopening will kick off during next year’s Little Norway Festival but expects to be moving boats back in before then.