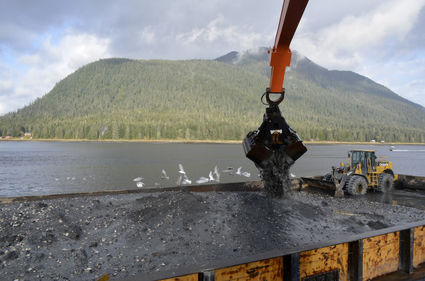 The dredge barge and its Seattle crew from Pacific Pile company have finished dredging North Harbor and are now working the area in front of Ocean Beauty.

The Pacific Pile dredge crew, based out of Seattle, finished dredging the North Harbor and have moved to the area in front of Ocean Beauty where they will spend the next couple weeks.

A crew of three men operate the dredge barge named ‘The Web’. Mike Eldridge, operator, typically runs the excavator. He watches a screen that displays water depth and tracks how far down he needs to keep digging. As Eldridge closes the bucket and digs out dredge material a splotch of yellow appears like a sponge on the map of the bottom of the sea floor.

The screen displays various layers of color that indicate depth. Red is high, yellow is closer to target depth but still too high and dark blue is too deep. Light blue is the color Eldridge needs to paint the screen.

The map is part of what’s called a ‘dredge prism’—the elevation and overall plan of what the sea floor is supposed to look like when the crew finishes digging.

When he finishes dredging an area, the two other crewmembers, Loren Bishop and Bobby Cossell, raise the ‘spuds’—two 35,000-pound pillars that anchor the barge. A tugboat out of Ketchikan then shifts the barge to a new position where Eldridge will start all over again and Bishop and Cossell will readjust the spuds.

Cossell is also the deck engineer. He works with the electronic equipment on the barge and surveys an area with more detail after Eldridge finishes the dig.

“Bobby’s got the technical skill that all us older guys are too dumb to know,” General Foreman Marty Locke said laughing. “The old days are gone where you just threw out a buoy and dug to the buoy.”

Locke’s been in the game for 30 years. He said before GPS and electronics, crews would measure depth using lead lines and tide boards.

“It won’t be too long before it’ll be an app on a phone,” Locke joked.

Bishop works primarily as the deckhand. He’s in charge of the spuds, general maintenance and the rest of the odds and ends that keep the barge safe and operational.

Bishop said the crew tends to work 10-hour days. The current outside of Ocean Beauty is stronger than in the North Harbor and Bishop said they’ve been coming to work twice a day—their schedule all depends, as most Southeastern Alaskans know—on the tides.

Bishop and the others have dug up antique glass bottles and other trinkets to give to Petersburg’s Harbor Master Glorianne Wollen. The last time the area was dredged was in the 70s.

“It’s been kind of like a garbage dump,” Bishop said. “There’s lots of batteries and tires. We found some license plates and it kinda makes you wonder where the cars are.”

The crew sleeps at a bed and breakfast but spends almost all its time on and in the barge. There’s a break room, a bathroom with a washer and dryer and several spaces dedicated to tools and equipment.

“There’s not many things we don’t have on here,” Bishop said. “It’s kind of like a hardware store.”

The crew and Locke said the material coming out of the current dredge area is less slimy than what came out of the North Harbor since dredging began in September. The borough had planned on using the spoils as capping material for metal scrap in the landfill but had to build a rock berm to contain the slurry material.

Locke said the current spoils are more sandy and stacks up better in the barge. He thinks the current dredge spoils might be suitable for the borough’s original plan.