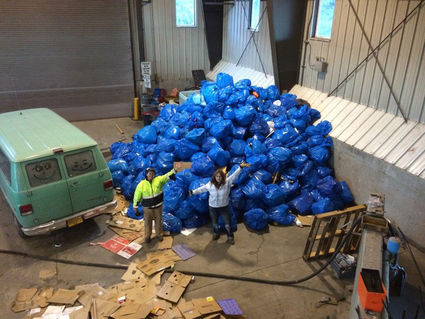 The Petersburg Borough recycling program has saved the borough $8,500 in solid waste disposal costs since the program began in February but the program still needs to see an increase in customers to pay for itself.

In order for the recycling program to break even, 40 percent of Petersburg solid waste customers need to be recycling.

"This is great but obviously there is room for improvement," Hagerman said. "I would still like to see the community achieve a diversion rate of over 50 percent but this will take time and everyone is doing fantastic so far."

The overall recycling rate is about 21 percent when comparing weights of baled solid waste that is dropped off at the baler, meaning customers who are dropping their trash off might not be bringing in recyclables or aren't separating them out of their trash.

Hagerman said the number is a large increase, however, from the 8-10 percent recycling rate of the past.

There are now 964 residential and commercial recycling customers.

In effort to encourage participation, Hagerman will visit Stedman Elementary School Friday April 25 to talk to students about the environmental benefits of recycling and to talk about what items can be recycled. The Petersburg High School technology class is also creating a short video about the borough's program.

"A simple piece of string, tying the corners of the bag together or using zip ties are all great ways to seal the bag's contents from the weather and make the collection process more efficient."

The borough ships solid waste at around $105 a ton but can ship recycling at around $35 a ton.