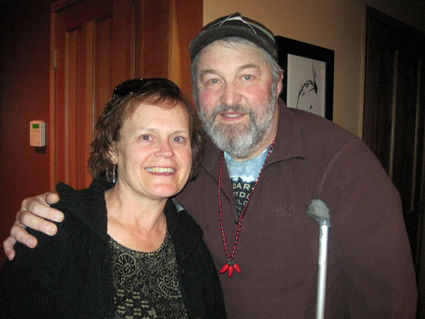 Leo Kondro was born Sept. 11, 1950 in Longview, Wash. to Bernard and Helene (Graunitz) Kondro. He died March 18, 2014 at the University of Washington Hospital in Seattle.

He grew up in Washington, graduating from Toutle Lake High School in 1968. He played football, basketball and baseball. Early he found a love of hunting and fishing.

Leo attended the University of Washington for two years of college. In 1970, Leo transferred to Central Washington State College graduating in 1972. He taught elementary school for five years in Kelso, WA.

In 1971, Leo met fellow CWSC student Mary Ann Benson. They married in June 1974 and lived in Castle Rock, Wash. Teaching positions in Kake, Alaska in 1977 brought them north. Their plan to teach there for two years turned into 37 years.

Kake was a perfect match for Leo. He loved halibut fishing, moose, and grouse hunting. His classroom often reflected his love of the outdoors. Daughter Karen and son, Ben were added to their family while in Kake.

In Leo's 37 years in Kake, he developed many close friends in the community of Petersburg, through the school and Presbyterian church, as a fisherman and through his children.

He traveled to Petersburg as a wrestling coach and found the support of veteran coaches like Rob Schwartz instrumental in building the newly formed wrestling program in Kake.

In July 2002, Leo became very ill sending him first to Petersburg and then  to the University of Washington Hospital. He survived tularemia, began hemodialysis, then peritoneal dialysis. The latter allowed him to return to Kake. Preparations for a kidney transplant began. Living in an Alaskan village did not allow him to be on the transplant list. Mary Ann's donor kidney in 2003 provided Leo with 10 more adventure-filled years. Leo retired from teaching in Kake in 2004.

Donations in Leo's memory can be made to the Northwest Kidney Center in Seattle, Wash. Services are planned for Sat., May 10 in Kake.