By Suzanne Ashe Special to the Pilot

Stedman Elementary gets a facelift 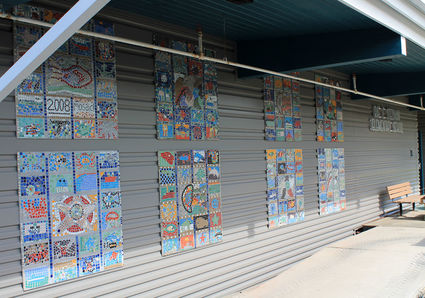 When students return to Rae C. Stedman Elementary School next week, they will experience a lot more than just a bump up in grade.

The exterior walls of the 45-year-old building have all been replaced and new windows have been added, making the school bright, warm and energy efficient for the first time.

Alaska Community Contractors was wrapping up work on the project this week with a few finishing touches such as painting and fixture installation.

The $2.3 million exterior wall renovation project that began in April was one of the School district's capital improvement projects.

According to Tony Yorba, a principal architect with the Juneau-based firm Jensen Yorba Lott, the company is often asked to remodel schools in Southeast Alaska in a similar fashion. Architects worked with school officials for a year prior to construction to get the plans just right.

The main reason Southeast schools are remodeled rather than replaced comes down to cost. "Capital improvement funds are very precious," he said.

Last spring, students were moved out of classrooms and moved to other rooms as the project began and classes ended a few days early to get a jump on the summer-long project.

The exterior walls are covered with slate gray metal siding and a sand-colored polymeric siding. The siding expands and contracts with the walls during temperature fluctuations.

"It's really guaranteed to just be here for just forever in this environment," Kludt-Painter said.

The metal is contrasted with blue exterior trim and soffits that are painted turquoise.

Each of the classrooms received an upgrade as well. All of the single-pane windows were replaced with triple pane windows. The walls have been painted and new carpet has been installed. Each room now has custom-made cabinets for the interior of the outside walls. The cabinets are a mix of a special furniture grade plywood which has been stained and has a Formica plastic laminate.

Plans for hallway improvements will be done at a later date, Kludt-Painter said.

The room with the most dramatic change in appearance is the cafeteria. Gone are the narrow strips of windows. Now the room boasts two levels of large windows that flood the room with natural light on a sunny day.

Aaron MacDonald, the project architect with Jensen Yorba Lott who designed the look of the new cafeteria, said the large windows will give students a better view the world around them. 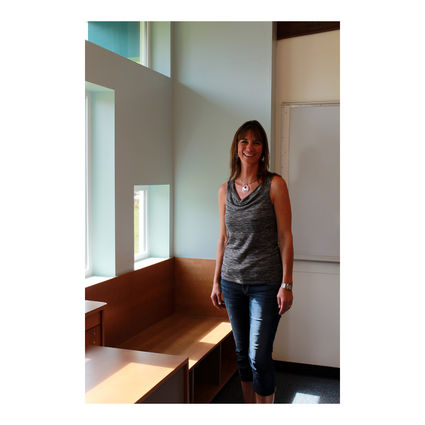 Elementary school Principal Erica Kludt-Painter shows off the new windows in the school cafeteria. The windows are part of the exterior wall renovation at the school. New insulation was also installed and the improvements will increase the energy efficiency of the building and provide long-term cost savings.

Because of the improvements, there should be a cost-savings in the long run for the district, Kludt-Painter said. "Before, there was no real barrier from the cold," she added.

To add to that cost-savings are new reflective LED lighting fixtures from Juneau-based Haight & Associates. The fixtures are designed so that 60 percent of the light reflects off the ceiling. The lights have self-adjusting sensors, which dim on bright days and will automatically shut off when the room is empty.

According to Kludt-Painter, the district opted to remodel the existing school rather than raze to the ground and begin anew.

"Actually, the footprint for this building is built for almost 400 students. Now, if you are going to build new, [the state] builds for the number of students that you currently have and we would lose real estate ... We would rather make do with the cabinets that probably need to be re-sanded in the interest of having enough space for a music room, which we do, and a place to take kids to do art, and places for small reading instruction. It's spread out," she said.