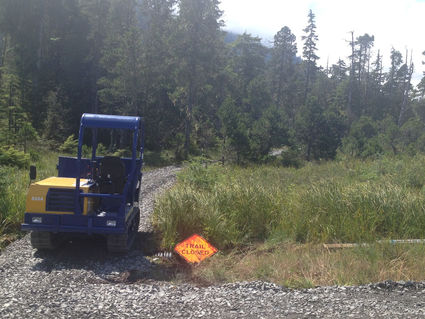 Work is underway on a new half-mile section of the Raven's Roost trail. The trail and cabin will be closed until October while construction is underway, though the first half-mile portion beginning across from the Sandy Beach parking lot is still accessible.

The US Forest Service and Korpela Construction crews have broken ground on a new half-mile portion of the Raven's Roost Trail. Construction began July 17 on the section which will connect the new trailhead that was built last year-beginning across from the Sandy Beach parking lot-to the existing trail that winds through the muskeg behind the airport up into the Tongass National Forest.

The new portion of trail will be similar to the half-mile portion of easy-grade, gravel trail built last year. USFS Cabins and Trails Manager Paul Olson said that means it will be accessible to everyone from serious hikers to families pushing kids in strollers.

The half-mile portion of trail that begins at the trailhead will remain open during construction, but the rest of the 4 mile trail and the Raven's Roost Cabin, where the trail ends, will be closed until October.

The decision to move the trailhead and first mile of trail came after falling rocks from the nearby rock quarry began causing damage in the late 1990s to the planks in the trail's boardwalk that runs adjacent to the quarry.

However, the process of moving the trail took several years because the new portion of the trial crosses through land owned by the Petersburg Borough, Alaska Mental Health Trust, the Alaska Department of Transportation, and the Department of Natural Resources, and the USFS had to acquire easements from each organization in order to proceed with the new construction.

The last of those easements was secured in the summer of 2013, and work has been expeditious since, with the new trailhead and path being built in a matter of months last summer.

Funding for this round of work is coming from the Federal Land Access Program (FLAP); last year's work was funded through the Resource Advisory Committee (RAC).

Remaining FLAP funds will go toward survey and design for the remaining miles of the trail, but funds for construction on the remainder of the trail have not yet been obtained.

Questions on the project can be directed to Olson at the USFS office.