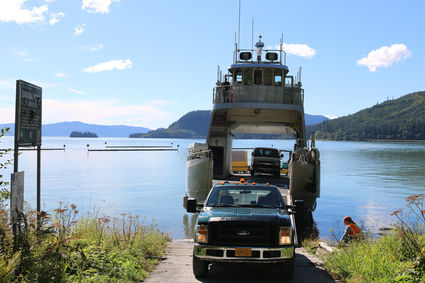 Rainforest Islands Ferry employee Breanna Brock (right), gives direction to Joshua Davidson, GCI Technician, while backing up his company truck for the ride back to Wrangell.

Rainforest Islands Ferry will be a three-stop service between Wrangell, Mitkof and Prince of Wales islands, running four times each week from spring through autumn. During the winter it will run on a reduced schedule. Based in Coffman Cove, the service is managed by the North End Ferry Authority (NEFA).

The ferry service makes use of a 65-foot repurposed landing craft, the Rainforest Islander, which had initially been slated for completion in late May.

"We started to deliver the boat in early July," ex...