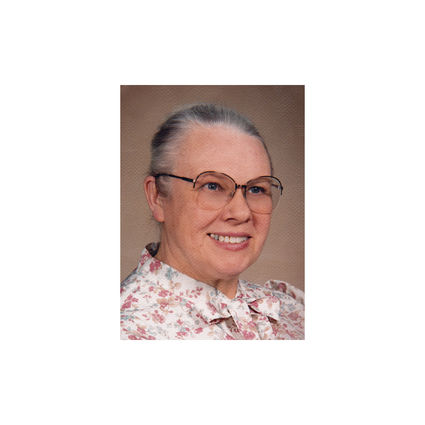 She was born February 8, 1928, the youngest of eight children to Henry and Magdalene Miller on the Ten Mile family farm. She loved family, faith and music.

After graduating Valedictorian from Meridian High in 1945, Frieda spent two years at Lutheran Bible Institute where she performed in the LBI Women's Quartet. She graduated in 1948 then worked at Camp Lutherwood where she met Paul Jordan; they married in 1952.

Frieda's religious knowledge inspired Paul, and shaped his career as a Lutheran pastor. During Paul's seminary studies in Columbus, Ohio, she wrote and produced Bible study materials at Wartburg Press, including a course (co-authored with Paul) published in the early 1960s.

After moving to Petersburg, Alaska in 1969, Frieda worked at the elementary school and earned her A.A. from Sheldon Jackson College in 1974. In Anchorage in 1976, Frieda was administrative assistant for the University of Alaska's Marine Advisory Program. She computerized offices, wrote proposals, and even prepared a fishing manual in Upik, Eskimo.

In Portland, Frieda was office manager at the OSU Extension Service of Multnomah County. She was 1986 OSU Classified Employee of the Year, was given another award for producing 19 publications, helping design an educational center.

In 1994 Frieda earned her B.A. from Eastern Oregon State College. She retired the same week. Frieda and Paul returned to Bellingham in 1995. Frieda continued to be very active at St. John's until she developed Alzheimer's. Paul was her caregiver until his death in January 2015; Frieda lived her remaining days at The Bellingham at Orchard.

In lieu of flowers, donations to St. John's Lutheran Church are suggested.

A memorial service will be at St. John's Lutheran Church, 2530 Cornwall Ave., Bellingham, on Saturday, September 12 at 2 PM with a reception to follow.

You may share memories with the family at http://www.westfordfuneralhome.com.