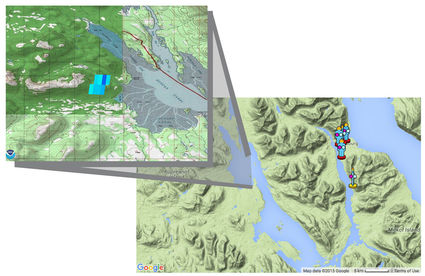 The blue bars represent reflected radar pulses from what Curator of Planetary Ices and Organics Marc Fries believes might be the meteor's wake of sound waves as it ripped through the air over Duncan Canal. Five Petersburg residents reported their accounts of flashes of light and blast noises to the American Meteorological Society website. The eyewitness accounts seem to match the location and time of the NOAA's radar reflection data.

Amongst the rumors and speculation pulsing through Petersburg’s streets and social media news feeds last weekend, a Johnson Space Center NASA scientist points to data that suggests a falling meteor shook Mitkof Island last Saturday morning, which could mean many Petersburg residents woke up to the flash of a fireball and the blast of a sonic boom.

John Havrilek witnessed what he described as a blinding streak of light and the sound of an explosion.

“It was amazing,” Havrilek said. “I was born around the time thunder and lightning was created. You would think I would have seen something like that before but I could tell it was a rare event that I’ve never come close to seeing before.”

“We (NASA curators) handle extra terrestrial materials,” Fries said. “One of the things I study is locating meteorite falls with weather radars. People reported large sonic booms. A meteor has to get really far down into the atmosphere to produce sonic booms, which means there’s a high likelihood they reached the ground.”

A sonic boom occurs when an object travels faster than the speed of sound, a speed roughly in excess of 700 mph. Sound waves are similar to water waves and a sonic boom is like a wake. As a large ferry speedily carves its way through the water, the smaller waves move so fast they merge into one another to create a larger wake. Similar to when a ferry passes your skiff, the large vessel passes you well before the wake thrashes your little Lund. In the case of a meteor plummeting through the local atmosphere the Lund in this scenario is Mitkof Island, and one would hear and feel it well after it passed overhead.

“A sonic boom can be powerful enough to shake the ground or the house,” Fries said. “In order to hear a sonic boom you have to have a large meteorite to get through the atmosphere.”

Eyewitness reports placed the fireball at times ranging between 2:22 a.m. to 2:33 a.m. Petersburg Harbor video surveillance footage shows a bright flash of light lasting for two seconds on nearly all its camera feeds at 2:25 a.m.

Meteorites reach the ground within about 90 seconds to around eight minutes after the fireball, blasting a turbulent wake of sound as they fall. Fries analyzed NOAA weather radar data from a station near Sitka and found what might be reflected radar energy from those sound waves at around 2:33 a.m. According to the video footage, the radar reflections near Duncan Canal occur eight minutes after the fireball.

Radar emits pulses of energy all the time. It sweeps the ground and different elevations detecting anything reflected back, and measures the intensity of the reflected radar energy. When Fries analyzes radar return he looks for places where radar picks up those energy reflections to where they converge with eyewitness reports.

“One thing that peaked my interest is that there’s a little bit of turbulence associated with the meteor,” Fries said. “Meteors are ripping their way through the atmosphere and they are slowing down all the way down to the ground. They leave a turbulent wake like firing a bullet. You hear the crack of a bullet and that’s the turbulent wake. That turbulent wake can but doesn’t always show up on the radar.”

Fries said sonic booms are typically heard within roughly 10 kilometers from where they were created, meaning that if it was a meteor, it went directly overhead Petersburg.

“It comes with no guarantees but that’s the best I can find,” Fries said.

One thing radar doesn’t detect is lightning, which did strike in the area Saturday morning as well, according to Tom Ainsworth, head of NOAA’s National Weather Service in Juneau.

“Yes, there was lightning in the area,” Ainsworth said. “But not everyone there agrees it sounded like thunder. The Tsunami Warning Center said there was no sign of seismic activity in the area at that time. Not having been there myself, it is still not completely known what caused the noise.”

Fries and other colleagues are also looking into seismometer data and he said they have noticed possible readings caused by a sonic boom.

The Petersburg Pilot sent the harbor video footage to Fries. He will analyze the images to see if he can more accurately pinpoint the direction of the meteor, the location of any surviving meteorites and if it corresponds to the radar data.

Fries said if a meteorite crashed into the woods next to Duncan Canal, or somewhere nearby, it’s possible some remnants of the falling debris could be found. He said to look for glassy black objects ranging in size from a marble to a fist.

“I looks kind of like pottery glaze, the interior of the rock is a different color than the outside, which is fusion crust from when it burns through the atmosphere,” Fries said. “It acts like fried ice cream. These things are very cold in space. They only go through the atmosphere for a few seconds. It’s hot enough to melt rock but it happens so fast that it doesn’t heat up the whole rock.”

If a meteorite were a little larger than a fist, the size of a loaf of bread for example, it would be big enough to cause a crater or damage to structures. But that’s not very likely, according to Fries.

Since 1997, nineteen confirmed meteor events have been recorded in the U.S. and Canada using data from NOAA’s radar network, although it’s likely they occur every day somewhere around the world. Given that 70 percent of the earth is covered in water, most of them are lost, and many aren’t noticed if a meteor falls during the day. Different types of meteorites fall to the earth and produce different effects. The “fireball” effect that was described Saturday morning points to a meteor that consisted of an accumulation of small pieces.

“If it’s really crumbly to start with, an accumulation of small pieces called a bolide, you’ll see a very bright fire ball and bolides are more likely to drop meteorites,” Fries said. “When that hits the atmosphere it comes apart like a shotgun blast.”

Four meteorites have been found in Alaska.

1. A meteor shower occurs when the Earth passes through the trail of debris left by a comet or asteroid.

2. Meteors are bits of rocks and ice ejected from comets as they move in their orbits about the sun.

3. A meteor that reaches the ground is called a meteorite.

4. Meteor showers get their names from the constellation where their radiant is located.

5. Comets continuously eject material with each passage around the sun; this replenishes the shower meteoroids.

6. Approximately 30 meteor showers occur each year that are visible to observers on Earth. Some of these showers have been around longer than 100 years. For example, the Perseid meteor shower, which occurs each year in August, was first observed about 2000 years ago and recorded in the Chinese annals.

7. Meteors are sometimes observed with red, yellow or green trails. The colors are caused by the ionization of molecules - like oxygen, which appears to be green.

8. A fireball is a meteor that is brighter than the planet Venus.

9. Radar indicates there are 12,000 meteors on any given night that are about the size of a piece of dust.

10. The International Space Station has shielding to protect it from meteors up to an inch wide.