Viking wrestlers take third among 2A teams at Regions 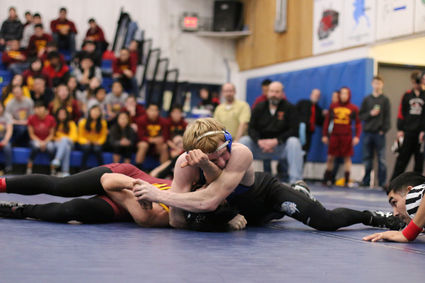 Crowd favorite Buddy Stelmach works hard to put the finishing touch on his pin of Jeffery Slwooko during the 120 pound championship match.

For wrestling fans attending the Region V Tournament in Petersburg last weekend it was long, loud and action packed. The hometown team earned a 2A third place finish in points and six Viking wrestlers qualified for State.

"For the young Viking wrestling team, it was a weekend of triumph and hardship as they enjoyed some great victories and humbling losses," says assistant coach Robert Schwartz. "It's hard fought victories and tough losses that they learn the most from, and there were plenty of learning experiences during the tournament."