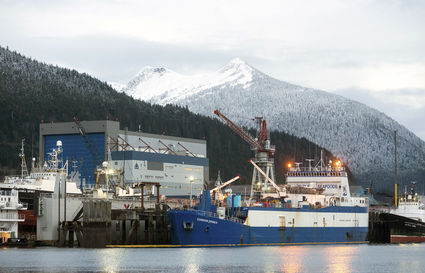 The Gordon Jensen, an Icicle Seafoods factory processor ship sits moored at the Ketchikan Shipyard for repairs on Tuesday.

Icicle Seafoods' The Gordon Jensen struck rocks on Saturday and the U.S. Coast Guard had to escort the damaged vessel to Ketchikan for repairs.

Coast Guard public relations Petty Officer Meredith Manning said Tuesday the cause of the incident is still under investigation and no injuries were reported.

The Canadian Coast Guard responded to the incident and the U.S. Coast Guard was later involved.

Manning said The Gordon Jensen has a max potential discharge of 20,000 gallons fuel and other pollutants but no pollution was reported.

"They haven't had any sightings of anything," Manning said. "That's what we're prepared to deal with but it doesn't look like they've reported any pollution."

Icicle hired divers to assess the damage and the fish processing vessel will be at Vigor Shipyard until January 22 for repairs.

The Gordon Jensen is 310 feet long and was originally constructed in 1943. Its home port is Seattle, Wash.