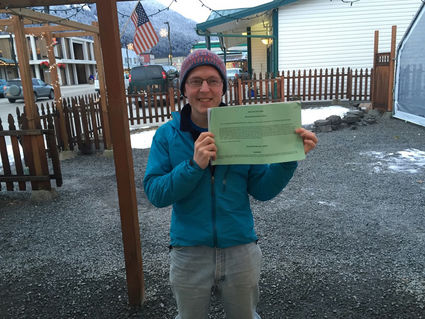 Rep. Jonathan Kreiss-Tomkins is visiting Petersburg over the next few days and is petitioning for signatures for the PFD Voter Registration initiative.

The initiative would give Alaska residents the opportunity to vote for a ballot measure that would let residents apply for their PFD Dividend and register to vote at the same time.

"Basically it gets all the paperwork for voter registration out of the way since people are already filling out their address and legal name and all the other information (for the PFD)," Kreiss-Tomkins said. "It might as well serve to register people to vote at the same time."

Kreiss-Tomkins was one of several who came up with the idea and organized the initiative last spring.

Thirty out of forty Alaska legislative districts must meet a signature threshold in order to get the initiative on the ballot for next year's primary or general election.

"If this passes, Alaska will have the most hassle free voter registration system of any of the 50 states in U.S. History," Kreiss-Tomkins said. "It's a really exciting two birds with one stone kind of solution. Of course, whether people want to vote is another question. The idea is that the paperwork shouldn't be a barrier for people voting."

Petersburg's house district 35 has a little more than 500 of the roughly 706 it needs and about two-thirds of the house districts have already met the signature requirements.

Initiative proponents estimate that that if it becomes law it would add roughly 10,000 registered voters to the rolls.

According to Alaska's Division of Elections the state would pay an upfront cost of $500,000 to change the election management system should the initiative pass and $300,000 in recurring annual costs.