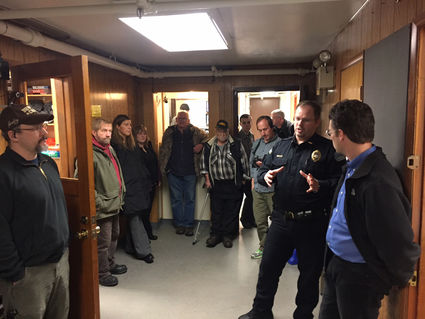 Police Chief Kelly Swihart stands next to the only restroom in the police station and tells visitors about the less than ideal conditions for the officers and inmates who live and work in the Petersburg Police Department. "In the cells we have now there are sinks and toilets but no showers," Swihart said. "The employees share this restroom with the inmates. Inmates take showers three days a week, other than that the restroom's ours. We're having some plumbing issues so if we shower more than one person plumbing backs up and you can see the trail where gray water flows through down towards dispatch."

The Petersburg Borough Assembly advanced a funding plan for the $9.9 million police and municipal building remodel, and put the project out to bid.

The remodel has been in the works for several years and architects have spent more than a year designing the facility.

MRV Architect Corey Wall gave a tour to interested residents and borough staff Monday morning before the January 4 assembly meeting. He detailed the sinking concrete slab, which visibly affects the structure of the police station which had some worried the building wasn't salvageable.

As it stands now, 54 percent of the project will be paid for through state and federal grants, with another 27 percent out of the borough's general fund and property development fund.

Borough Finance Director Jody Tow outlined ways to pay for the rest of the project using $125,000 of E911 surcharge funds and $500,000 of land sale proceeds along with an interfund load from the electric fund in an amount up to $1.3 million.

Borough Finance Director Jody Tow said the loan is a "win" for Power & Light because the loan would be paid back in no more than eight years at a 1.5 percent interest rate and the electric fund only makes 1.1 percent interest off its investments.

The borough's general fund would use around $174,000 of annual fish tax revenue to pay back the electric fund.

"The harbor will continue to receive fish tax revenues in the amount of $350,000 annually while this loan is being repaid," Tow said. "This base (project) bid includes $700,000 in contingencies which we may not use so we might not need a $1.3 million loan."

Several members of the public, including Amy Marsh who represented the Public Safety Committee, spoke in support of a new police facility and its funding plan.

"We believe the best way to raise the needed funds is to borrow from other departments who have a surplus," Marsh said. "The funds will be paid back with interest which is a win-win for those funds and our public, which will not have to consider raising taxes to obtain this critical service."

Gerry Whitethorn also spoke during the meeting and said while he's in full support of a new police station he's also concerned about borrowing money from other funds and borough spending habits.

"I think we're burying ourselves in O&M (operations and maintenance) and replacement depreciation with many multi million dollar projects," Whitethorn said. "We're a town of 1,000 or 1,200 taxpayers."

Assembly member Bob Lynn asked what other departments could the general fund borrow from.

Borough Manager Steve Giesbrecht said they chose the electric fund because it has around $6 million in reserves and for transparency.

"It's very clear in the charter that that money must be paid back with compensation, meaning with interest," Geisbreacht said. "So we wanted to basically try, in good faith, to show people, yes we're going to borrow the money to build this building and yes we're going to pay it back."

The Borough Assembly unanimously passed the resolution for the funding plan but the public still has plenty of time to comment on it. The plan can be changed over the course of the next six weeks as it proceeds through its three readings and public hearing.

Giesbrecht also said it was important to get the ball rolling so that potential contractors would be satisfied that funding was in place before they bid on the project.

The project is expected to go to bid in the next several weeks and the assembly should have a list of bids to review by mid-February.

Construction is expected to begin this summer and some borough staff will rent space in the Petersburg Indian Association building while others will shift their workspace to areas of the municipal building that aren't being actively worked on.