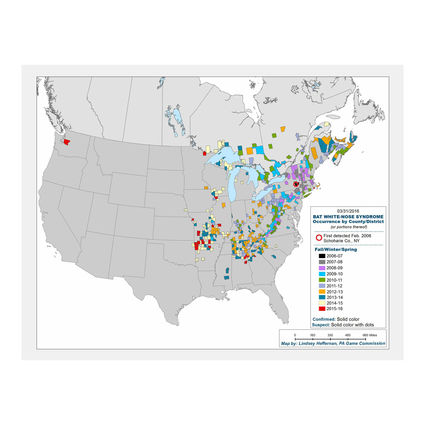 This map shows where and when the fungal infection known as 'white nose syndrome' hit the U.S. Experts hoped it wouldn't appear on the West Coast for another 15-20 years.

The Alaska Department of Fish and Game is looking for citizen scientists to track bat local bats in an effort to track the development of a deadly fungus affecting bats known as 'white nose syndrome.'

ADFG's Fish and Wildlife technician Steve Lewis gave a talk at the Petersburg Public Library Saturday where he provided a bat primer and informed locals on how they can help ADFG better understand local bat populations.

Lewis said no one knows where white nose syndrome came from but that it's present in Europe and Asia and was first spotted in the U.S. in New York in 2006.

"It's a fungus and they call it white nose because it starts growing around the nose and then gets into the skin and the wings and causes them to itch," Lewis said. "Bats don't hibernate because there's some irritation and they end up starving to death because they don't hibernate."

White nose has killed around 7 million bats in the eastern U.S. and experts hoped it wouldn't hit the Pacific Northwest for decades.

"Last March we knew there was white nose in eastern Nebraska," Lewis said. "A week ago it jumped over here and we found a dead Myotis (bat) 30 miles east of Seattle. We were hoping we'd have 15 to 20 years before white nose showed up. Now it could be next year. "

Scientists identified the bat as a western subspecies of Myotis, not a "hitchhiker" from another region.

Lewis said ADFG needs locals to volunteer to do driving surveys to help track those bats.

"Those driving surveys are really important because it's giving us some idea of bat numbers and bat species in each of the towns in Southeast," Lewis said. "That's going to be really important to get a baseline data set before white nose shows up."

ADFG's driving survey is an effort to track bats by echolocation. All the bat species in Alaska use echolocation to track insects and navigate the environment.

"They're yelling at about 90 decibels out of their mouth and it goes out and hits the moth or the tree that they're trying to get around and it bounces back and their whole brain is wired such that it really works well for them," Lewis said. "They have a sense of distance and how big and whether it's moving."

Different bats have different ultrasonic ranges and bat detectors convert their high frequency calls to lower frequencies within the range of human hearing, allowing trackers to listen in on the bats while they feast on insects and identify which species is around. Bats can catch around 1000 mosquito-sized insects in one hour.

Beginning this month and ending in September, volunteers will be given a bat detector along with a GPS and asked to drive the Three Lakes Loop road at 20 mph to try and listen in on the bats.

Volunteers will need to start the survey 45 minutes after sunset and weather conditions need to be dry and not windy.

Lewis said there is some hope that white nose syndrome won't affect large populations of local bats because they've been found to roost in areas other than caves.

"We found that they're going into stumps or into cracks like talus slopes or broken rock instead of caves," Lewis said. "On Prince of Wales we found maybe 15 or 20 in a cave. That seems to be true along the West Coast and even the Midwest once you get towards Colorado. We were hoping that that's going to be something that keeps white nose from spreading because they won't congregate in large numbers."

Lewis hopes there will be enough volunteers to survey once a week through September and once every two weeks at a minimum.

People can sign up or find out more details at the Petersburg Public Library where they will also pick up the equipment and data sheets.