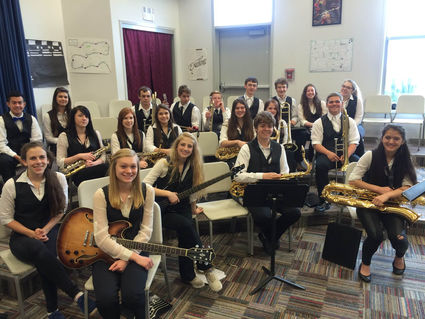 Over 50 band and choir students participated in the Region V Music Festival in Ketchikan last weekend, and the results show the PHS music program led by director Matt Lenhard continues to improve. The event brought groups from all over Southeast together and focuses on celebrating the region's close-knit music community. The festival is non-competitive, but offers participants the opportunity to gain ratings.

PHS concert band, jazz band and choir performed during the event, and there were two solo performances by Kayleigh Eddy on flute and Alexandra Bless on clarinet earning a superior rating, and one ladies quartet earning a superior rating. Both bands and the choir also received high marks for group performances, and instruction from an adjudicator were given afterwards on ways to improve.

"Each group earned a superior, which is excellent," Lenhard says. "At the same time, each group was pointed in a direction on how to improve. There's always something better you can strive for."

Lenhard says he used to go to the festival expecting the bigger schools to take the spotlight and really make him go "wow." After 18 years of going to the annual event he appreciates the hard work everyone puts in but the positive strides shown by his students over the years impresses him the most. And now, PHS performances are the highlight of the weekend, he says.

Outstanding musician awards were chosen by their peers from each group by ballot, and for concert band Kayleigh Eddy on flute earned the honor, Jeremey Randrup played a mean drums during jazz band, and soprano Hannah Pfundt took the honor for PHS choir.

For Pfundt, the weekend meant her last time taking part in the festival, something she categorizes as sad, because she knows she'll never see some of the people again. But at the same time, the weekend is full of fun and a huge part of it is learning more music. Pfundt enjoyed watching the other groups and learning from what they did right or could possibly improve on. In addition to singing in the choir, she also plays bass in the jazz band, something she loves, even if it means dedicating herself to early morning practices.

"It's fun because you get to wake up so early every day, I'm just kidding," Pfundt says laughing. "It's actually really fun because jazz is really chill."

Pfundt says Lenhard is also very chill and jokes around with students, but admits the music director is not immune to showing signs of stress which is something her classmate Kelly Engell agrees with wholeheartedly.

Engell, like Pfundt, has learned under Lenhard for the last four years. Engell comes from a musical family and she's been playing trumpet since the sixth grade and became first chair trumpet her sophomore year. Last year she took up singing, and was selected as an all-state choir member this year. 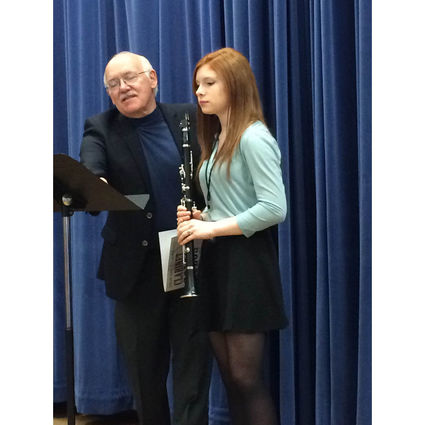 Both girls are all smiles while speaking about what Lenhard brings to the music program.

"He is very patient when it comes to being a band director, you have to be patient, because you see what's wrong and that can't always be fixed right away," Engell says of Lenhard. "He just keeps working toward what he wants but doesn't get angry, maybe a little stressed out when it comes close to music festival, but never gets angry or mad."

Lenhard says that every year is exciting and the festival never gets old. He enjoys everything about the event, from seeing students grow to conversing with fellow instructors. Lenhard himself has become a staple of the event. He has the longest tenure of any instructor in Southeast, and intends to keep improving.

"I believe that Peterburg's music program is getting better and better," he says.