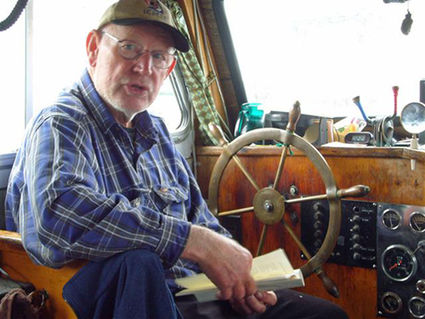 Dan Wesley Crane, 75, died on March 15, 2016. He was born on December 2, 1941 and raised in Denver, Colo., to a third generation railroading family. He began his love affair with Alaska as a nine year old boy. He would read through a large stack of "Alaska Sportsman" magazines while his folks played a weekly game of pinochle at the neighbor's house. Articles and pictures about trapping, hunting, fishing, and building log cabins fueled his imagination. He planned to move to Alaska, be self-sufficient, and become a hunting guide.

Dan graduated from college in Colorado and taught English, French, and German. He came to Alaska, as John Haines would say, "A young man green and lonely." In order to purchase a fishing boat while he was teaching high school and coaching basketball, he shoveled shrimp at night in a local cannery in Kodiak. He did become an assistant guide and worked on the Kenai Peninsula as well as Yakutat. After finishing an MFA degree in Creative Writing and completing five years of teaching, he got hooked on fishing. He said, "I wasn't worth a damn for anything else after that."

Dan won the grand prize in the Anchorage Daily News Writing Contest in 2003 and published a book of poetry called "Poems Without Rhyme or Reason and a Couple of Yarns." He had the uncanny ability to remember and recite lengthy poems, Shakespearean sonnets, as well as lyrics by Leonard Cohen, Bob Dylan, and Kris Kristofferson. Dan's basso profundo speaking voice was so distinctive people would often switch their VHF radio channel to catch his latest story.

Dan and Carolyn, his wife of 48 years, have two children, Vern Crane and Stephanie Pawuk. They have shared many adventures living in coastal towns from Kodiak to Ketchikan. Mischievous, helpful, caring, and generous Dan felt his life was made complete by his six grandchildren, Anya, Noah, and Savina Pawuk as well as David, Wyatt, and River Crane.

A celebration of Dan's life will take place on the fishing vessel "Viking Spirit" in early August. Dan's ashes will be spread in lower Chatham Straits. "Be on the lookout for an empty, dusty, 3 pound coffee can." WF7767 over and out.