Senior Walk was a huge hit 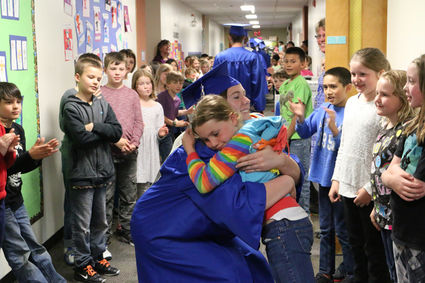 Adanna Kvernvik gets a hug from third-grader Sidnee Stewart during the Senior Walk through Stedman Elementary School on Monday, May 23. Kvernvik and her classmates are the first class to take part in the event.

This year's graduating class at Petersburg High School donned their caps and gowns early for a very important walk around campus. The senior class started a tradition called a Senior Walk that will hopefully inspire younger students to set graduation goals early, and stay in school.

On Monday, the seniors dressed up and started the event by walking through the middle school while students lined the hallways, cheering the seniors on. Then things got loud when the graduates entered the elementary school. There were wide smiles everywhere with students clapping for, high-fiving and even hugging graduates.

The idea came from a viral video making the rounds on Facebook of high school seniors from Texas visiting elementary and middle schools in their district. The video quickly came on Superintendent Erica Kludt-Painter's radar.

"I had several people in the community send it to me and ask me about it," she says.

The decision was made to hold the walk this year, and it seems to be a big hit.

"I think the younger students really enjoyed it," Kludt-Painter says. "And maybe an unintended consequence was a lot of older students got to enjoy it."

Senior Adanna Kvernvik enjoyed herself. She got a couple hugs and got to see a lot of youngsters she taught as Norwegian dancers. Kvernvik told some of the elementary age dancers that she wouldn't be back next year, but others had no idea she was a senior.

"I knew quite a few faces when I walked through the hallways, and you could kind of see shock on their faces," she says. "That was kind of a bummer, but it was pretty cute."

Kvernvik says her whole class was excited about the walk, and seeing former teachers with their current students brought back a lot of memories. She also found herself reflecting about the fact she is a now an adult and a role model.

"It was a really great experience to just walk through there and have all these young faces looking at you with utter amazement," she says. "I am so glad we did it."

Third-grader Sidnee Stewart was excited about seeing the older kids walking through the hallway of her school. If she had one thing to change, it would be having the seniors walk slower, she says.

"I am really looking forward to doing that when I am growing up, and I think it would be fun," she says.

However, the day was bittersweet for Stewart because she did not realize Kvernvik was graduating until she saw her at the end of the line. Stewart spent time with Kvernvik as a Norwegian dancer.

"I thought I was going to get to see her a lot more often, but apparently she's graduating and she's going off to college," Stewart says.

Believe it or not, Stewart already has career goals on her mind. She thinks she wants to be a dentist, but she doesn't know exactly why, just yet. And she's already thinking about higher education, and the ramifications of growing up.

"I want to go to college, but I don't really want to move away from my parents when I grow up because it's going to be sad," she says.