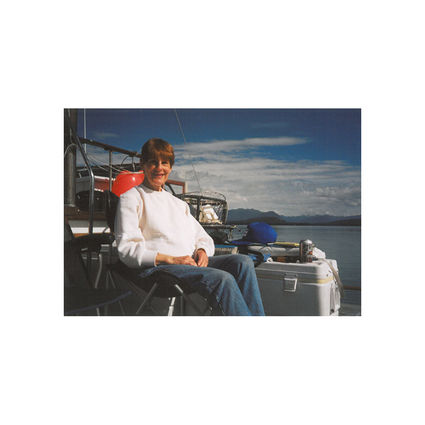 Lesley Stella Older Croxton, 89, was born on May 17, 1926 to William and Frances Older in Adreian, Mich. She was four years old when she moved with her parents and sister Lee to California.

She met Loren Croxton as the U.S. entered WWII, and they married when he returned after serving in MacArthur's Seventh Fleet in the South Pacific. Together they graduated from Oregon State University, and soon opened a mink ranch in Oregon, where their daughters Ruth and Mary were born.

With the post-war declining fur market, they decided to move to the Territory of Alaska, where Lesley began her teaching career and Loren completed graduate work at the University of Alaska. Loren's thesis took them to Petersburg, where he studied the local mink population, and where he and Lesley fell endlessly in love with Southeastern Alaska.

In 1959 they joined the statehood celebration as Alaska became the 49th State. Loren's game management career with the Alaska Department of Fish and Game moved the family to many Alaskan communities over the years. They were living in Anchorage during the 1964 Alaska Earthquake, the second most powerful recorded in world history. They had moved into a new home a few weeks prior to the Quake, and their previous home and a vast surrounding residential area were completely destroyed and lost to Cook Inlet.

They continued their careers, always with the dream of retiring in Petersburg, which became a reality for them in 1980. They were a team, at home, and on the water with their MV Turtle, enjoying the fishing hot spots, and the grandeur of Southeastern's waterways, which they shared with many friends and relatives.

She will be remembered for her gentle nature, her constant smile, her love of writing children's short stories, her dedication to family, cooking, hosting dinner parties, her love of family pets, her skills with young children, and her Lutheran faith and dedication to the Lord.

Lesley was preceded in death by daughter Ruth in July, 1981, and husband Loren in October, 2010.

Lesley is survived by her daughter Mary of Palmer, Alaska, her sister Lee's husband Frank Coleman of Eugene, Ore., sister-in-law Virginia Shannon of Salinas, Calif., and their families, including many nieces and nephews and their families.

Lesley will be laid to rest next to Loren and Ruth in Petersburg.