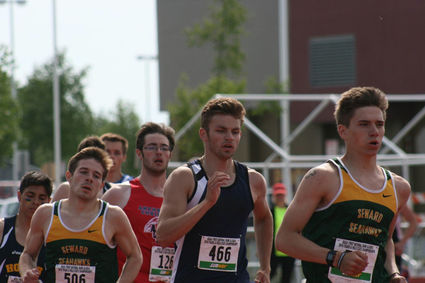 Tucker Hagerman stays at the front of the pack during his record setting 800 meter run at state.

Petersburg High track and field took 15 athletes to the state meet in Anchorage last week, and the girls team scored enough points to earn third place out of 29 1A/2A/3A teams. The number of competitors was the most head coach Brad Taylor had ever taken to the season finale, and every Viking scored points in at least one event.

A couple of Vikings wanted to break school records, and the girls 4x800 relay accomplished a new school record even though they had an alternate running at state. Avery Skeek did not compete due to a hip injury, and was replaced by Mariah Taylor, who joined up with Eddy and Hannah and Erin Pfundt. The group was all smiles after finishing third in the event.

Senior Tucker Hagerman achieved a goal he's been working for in timely fashion. Hagerman was down to his last attempt at breaking River Quitslund's 2015 record setting run in the 800 meter last year at state. Hagerman qualified for the 1600 meter and 3200 meter at state, but scratched those events to focus on the 800.

After running the 800, Hagerman looked to Coach Taylor in the stands. The veteran coach used hand signals to communicate Hagerman's time to him, and let him know he did it.

"The first thought that came across my head was - yes! Because I had been working so hard for that, and I finally got it," Hagerman said. "I was incredibly tired, but it was also really invigorating."

Hagerman's teammate Casey Bell came up short of setting a school record in the 110 hurdles and 300 hurdles this season, but he is poised to chase and break them next season. Bell is a junior, and currently holds the second fastest 110 hurdles in PHS history, and he earned a second place finish at state in the event.

"Definitely my best season yet. I feel more confident, and I feel that I'm going to push myself even harder to get to the top," Bell said. "I have more goals now and I am even more determined than I was before."

Over the winter, Bell and Ith plan on hitting the weight room to train and motivate each other for their final season on the team. Ith is no stranger to hard work, and after this season her name can be found on half of the PHS school records.

At state, Ith jumped over 38 feet to win the triple jump, and she jumped two inches shy of 19 feet in the long jump to claim the top spot. Ith also won the 100 hurdles and finished second in the 300 hurdles, despite battling a nagging knee injury.

"State went really well, it really did," Ith said. "I was really happy with my events, especially triple jump. I kind of surprised myself there."

Ith will compete this weekend in an all-star meet in Kodiak with the top track and field athletes from all over Alaska. After this season, Ith holds the second longest long jump, and she also holds the third longest triple jump in the history of Alaska track and field. 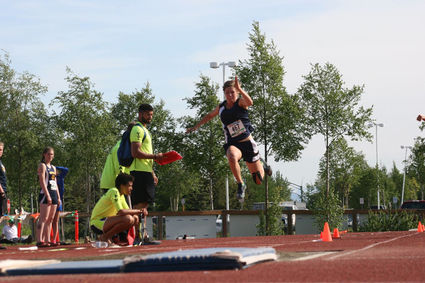 Izabelle Ith hitting her stride during a triple jump attempt at the state track meet in Anchorage last weekend.

The junior class is one of the best coach Taylor has ever seen, but he said sophomore Elisa Larson created a buzz during discus at state. Larson threw a personal best 90 feet, 7 inches.

"She was in second place in the event until two girls passed her at the end," coach Taylor said. "She ended up taking fourth, which was huge for team points. She just kind of came out of nowhere."

Larson said going up against seasoned juniors and seniors was nerve-racking at first but once she started throwing, it all went away. The girls placing ahead of Larson were all seniors, so she is looking forward to see how much she can improve, she said.

"I was just hoping to do my best," Larson said. "And being up there with a lot of people that are older than me, it showed me what I can expect for the next two years."