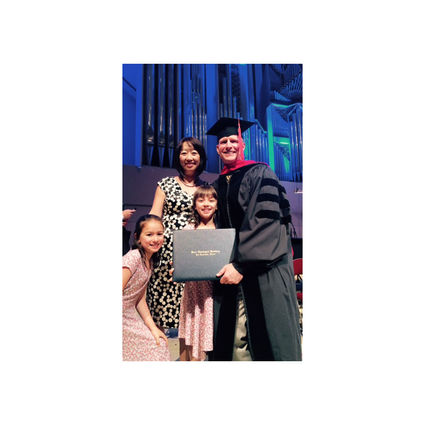 Ying and Mike Schwarte pose for a family photo with Joy, left, and Olivia, center, after he received his Doctorate in Ministry from Knox Theological Seminary, on May 13, 2016.

The Petersburg Lutheran Church pastor Mike Schwarte and his family are leaving town this week to pursue a new life in Alabama.

He was assigned to Petersburg's Saint Catherine of Siena Catholic Church in 1999 and later was employed with the Petersburg Police Department and worked as a commercial pilot for Pacific Wing. Most recently he's pastored the Petersburg Lutheran Church for over 7 years.

Schwarte's wife Ying was accepted into a highly competitive Ph.D. program at the Auburn University School of Business. The program will take four years, and once completed she will be able to seek...