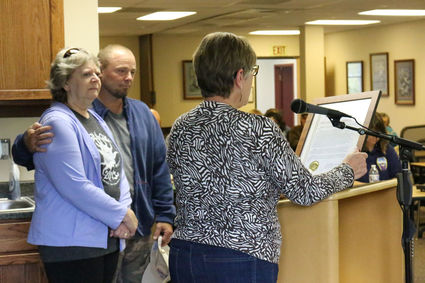 Sally and Peter Dwyer listen as Cindi Lagoudakis reads the proclamation of appreciation the assembly prepared for Al Dwyer, who passed away August 5th.

The question of prohibiting marijuana licenses in the Petersburg Borough will appear on the regular municipal ballot in October. The ordinance passed unanimously in its third and final reading at the assembly's meeting Monday.

There was one change made to the ordinance, after it passed its second reading at the assembly's previous meeting, to bring it in compliance with state law. The addition is a clause clarifying that local government may not prohibit the personal use or possession of marijuana and marijuana products.

"That's not any change that we have made locally,'' said vice mayor...