By Jess Field and Dan Rudy 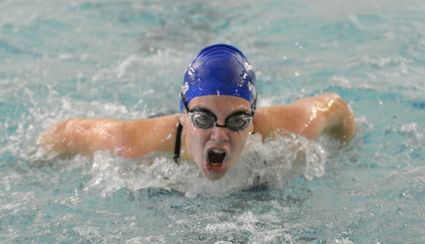 The PHS swim teams traveled to Sitka last weekend for the first meet of the year. The meet offered two days of events and showed the strongest events for the Vikings so far would be anything involving freestyle, according to head coach Andy Carlisle.

"We had everybody do pretty good, especially in our freestyle races," he said. "Our other races weren't as good as the freestyle ones, but they were still pretty good overall."

For Carlisle, having incoming freshmen ready to make an impact when they hit the pool makes life easier and can be a nice motivator for upper class athletes.

On Saturday, Ith captured the first victory of the day for the Vikings early in the 50 yard freestyle, with Whitethorn finishing in fifth place. Higgins followed up his teammate's win by taking the 50 yard freestyle as well, and Erickson ended up in third place, coming in behind a close finish. Higgins touched the wall at 24.43 seconds and Tate Goering of Juneau-Douglas finished at 24.44.

The boys ended up winning the team points for Saturday's meet, pulling ahead from second place Juneau-Douglas by 15 points. The girls had a solid showing but ended up in third place during both days of competition.

The teams are off this weekend, and will travel to Juneau the week after. For Carlisle, swimming in Sitka was a good test and the team will have to keep putting in hard work if they want to see results, he said.