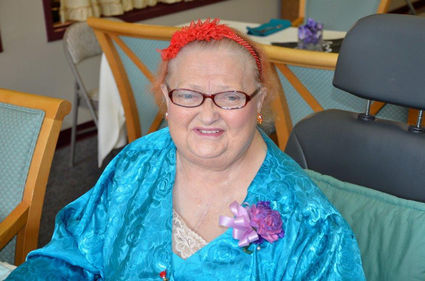 On April 25, 1935 Royal Ezra Duval and his wife Clara Marcia Duval were blessed by the birth of Ruth Elaine Duval in Randolph, Vermont. In 1941 the family moved to Bremerton, Washington where Royal worked at the naval ship yard. Five years later in 1946 the Duvals moved to Petersburg, Alaska.

After living on Front Street for a time with Ruth's grandfather Charles Oscar Duval and wife Druise, Royal and Clara purchased a home at 2.5 mile Scow Bay Road. It was here that Ruth spent her happy childhood years through

high school with her brother Bob.

Ruth went to college at Pacific Lutheran University in Tacoma earning a BA in Education. In Ruth's senior year of college she met Walter Dawson and the following year, on June 11, 1958, the two were married at the Lutheran Church in Petersburg. Walter died on December 11, 2014 having been married to Ruth for 56 years.

Ruth followed in her mother's footsteps and became a teacher in the Petersburg School system, retiring in 1987. For 30-years, generations of Petersburg students passed through Ruth's kindergarten classroom. Ruth was very happy to see past students up until the time she passed away. After retiring Ruth and Bud opened Precious Lambs Preschool.

Ruth was active in the Lutheran Church and later the Assemblies of God Church, never missing a Sunday of worship and fellowship. For 60-years Ruth lived in Petersburg becoming a part of the town. In the summers of the 1970s and 1980s Walter and Ruth would rent a small cabin next to their home to many people working in the canneries. Some of these people would later make Petersburg their home and others would move on always remembering Ruth. Ruth always had time for those young people and always with a smile on her face.

During their time in Petersburg Walter and Ruth had four children, Cora Rose Dawson, Diana Ruth Bell, Daniel Royal Dawson, and Darrell Walter Dawson. In 2005 Walter and Ruth moved to Juneau and later became residents of the Pioneer Home. Ruth touched many lives in Juneau and had a very active life with many friends.

Ruth is preceded in death by her parents Royal and Clara, husband Walter, her brother Robert, and daughter Cora Rose.

Services in Juneau will be held on December 8 at the Pioneers' Home at 1:00 pm. Services in Petersburg are TBD.