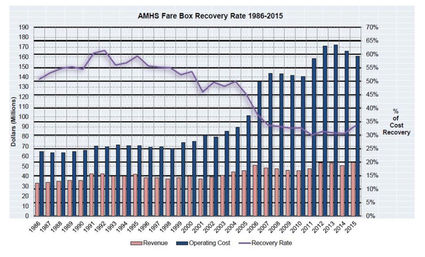 The above chart compares revenues taken in by the Marine Highway System each year in fares to its operating budget, in millions of dollars (at left). The flowing line (measured at right) gauges the percentage of cost recovery, or the proportion of operating costs covered by fares.

WRAGNGEL – When Southeast Conference meets for its annual Mid-Session Summit in Juneau later this month, among the items high on its

list for discussion is the structural reform of Alaska's ferry system.

Southeast Alaskans have become dependent on the state's Marine Highway System since its establishment in 1959, essentially becoming their road network into and out of the region. It is a significant economic driver for the coastal communities it services as well, with an estimated impact of just over $103 million in direct and induced influence in 2014. Though figures for 2016 are still...