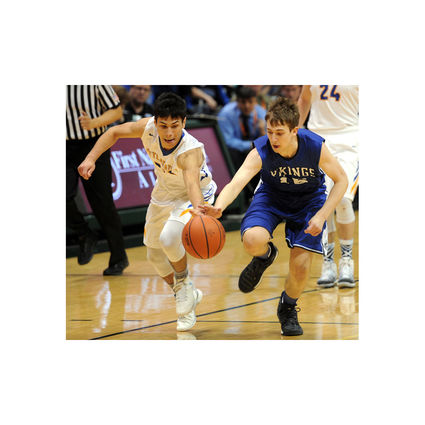 Carsen Winter of Metlakatla, left, sneaks up on Louden Sandhofer to steal the ball during the boys 2A championship game at the Alaska Airlines Center.

Petersburg High School came out on top at the state level over the weekend, with the boys beating all other comers in the 2A Alaska ASAA/First National Bank Basketball State Championship in Anchorage.

After handily taking first in the Region V Tournament the week prior, the Vikings headed into the championships with high hopes.

Starting play on March 16, the Vikings were first matched up against Tikiġaq (Point Hope), a school from the North Slope. "It was a good matchup for us. They are a good, fast team," commented Petersburg coach Rick Brock.

His boys jumped out to an early lead, ahead 3...