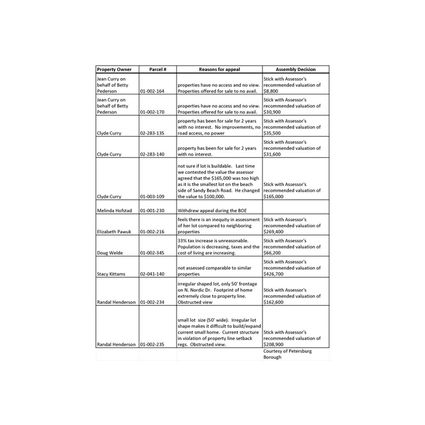 The Petersburg Borough Assembly meeting as the Board of Equalization (BOA), on Monday, upheld the Assessor's

property valuations on each property brought before them on appeal.

Six appellants sought to have property values lowered on 10 parcels.

According to Borough Clerk Debra Thompson 34 property owners brought appeals on 79 parcels. Of that number, the Assessor met with owners and resolved 69 of the appeals before the BOA met. Melinda Hofstad withdrew her appeal during the BOA meeting.

Appeals were sought by the following: Jean Curry on behalf of Betty Pederson (parcels 01-002-164 &amp...