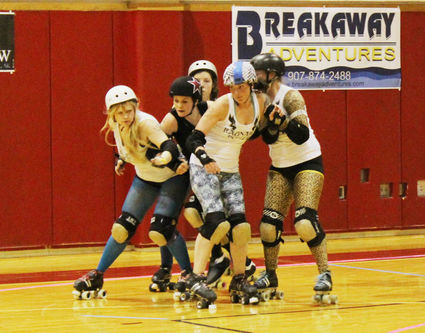 Stars pushing against stripes, Rachel "aRāchNophobia" Newport (black jersey, with star) gets into a jam against the white team blockers. At right, Amy "Rowdy Rawlins" Anderson (pivot, with the stripe) and Jodie "Pushy Riot" Banks try to stay her momentum.

The event coincided with the town's Tent City Days celebration, which took place over the weekend. The derby bout was the main event, and Petersburg's Ragnarök Rollers fielded 11 of the 28 skaters that took part. In addition to Wrangell, players were sent from Sitka, Juneau, Ketchikan and Southeast's newest league, Prince of Wales.

"It was epic," said Angie Christensen, who skates under the pseudonym "Slammin'." Players and refs alike adopt persona...