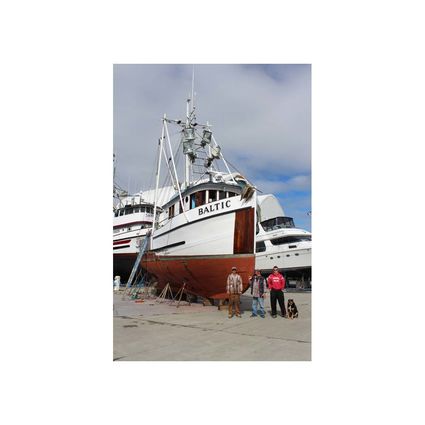 Levi Dow, Steve Thomassen Sr. and Tanner Thomassen get ready to undertake some annual upkeep on the Baltic, a fishing vessel first launched in 1917. The senior Thomassen has been fishing on it for about half its life in the water.

WRANGELL – The sounds of a couple dozen projects can be heard coming from Wrangell's Marine Service Center, as commercial fishermen, pleasure boaters and other mariners finish work ahead of the busy summer season.

Activity at the yard has heightened over the past six weeks, harbormaster Greg Meissner reported, following a steady but comparatively slower winter. The uptick is normal, however, with a little fewer than half of the boats lifted at the yard through the year moved during this final fiscal quarter.