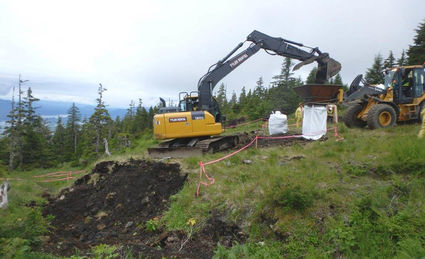 The location of the cleanup is near Duncan Canal and about 2,300 feet above sea level. Duncan Canal is in the background. The site used to be part of a White Alice Communications System that would help detect potential Russian missile attacks.

A former radio site that used to help detect suspected Russian missile attacks in the Cold War is now being excavated to remove contaminated soil, which comes after several other locations in the site were already cleaned and treated, said Stephen Krause, the project manager.

In 2014 and 2015, cleanup efforts were made at six different locations at the same site near Duncan Canal, except for one, which is called "DA001," that started mid-July and might continue into September, Krause said. The Air Force Civil Engineer Center is leading the cleanup and Paragon Professional Services LLC is...