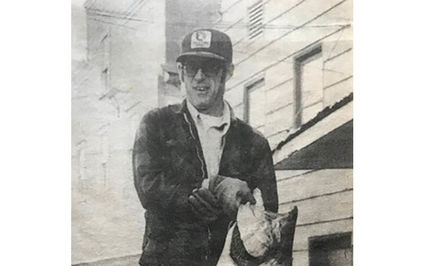 Elmer C. (Butch) Whitethorn Jr., 75 peacefully passed away on March 7, 2018 in his one and only hometown, Petersburg, Alaska.

He was born to Elmer C. Whitethorn and Margaret (Sis) Roundtree in Petersburg on December 26, 1942. He grew up at his parent's house and was part of the original Lumber Street gang. Some days you could see him zipping through town driving a little red car that his Dad built for him out of Crosley automobile parts.

Butch graduated from Petersburg High School in 1961. He spent his entire life in Petersburg with the exception of enlisting in the Army with his buddy, Jerry Dahl, in 1962 – 1964. He

passion as a commercial salmon fisherman. He was known to have a secret fishing hole

which he would not disclose to his family or friends.

Butch lived a simple life which included visiting with the locals but he always looked forward to his daughter, Desiree, and son, Darren, visiting each summer. During his retired years, he enjoyed his daily trips to the Moose to visit with his lifelong friends. You could set your watch to when you would see his Chevy pickup parked in his favorite parking spot by 11:45am.

A Celebration of Life event is being planned for June.