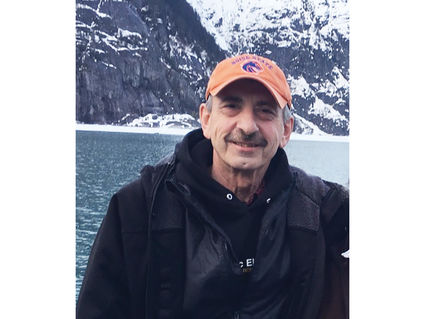 Kevin Nicholas Volk passed away at Petersburg Medical Center on June 15 2018, from complications due to gastric cancer. His wife and children were holding his hands during the last beat of his heart.

Kevin was born July 16, 1955 to Edward Valentine Volk and Rose Magdalena (Axtman) Volk in Rolla, ND, he was the seventh of twelve children. Kevin grew up on the family farm and graduated from Mt. Pleasant High School in 1973.

In order to get as far away from farm work as possible, he joined the US Navy in the summer of 1973. He was enlisted as a Seaman on the USS Ready, preparing to depart for Vietnam. The gunboat was instead sent to Naples, Italy. During his service and adventures in Italy, he was diagnosed with Hodgkin's Lymphoma. After beating cancer, he was reassigned to the Navy Liaison Office in Ft. Myer, VA where he worked until his honorable discharge in September 1975.

In the spring of 1989 Kevin headed north to Alaska to fulfill his hunting and fishing dreams. In the spring of 1990, he moved his reluctant wife away from her family to the Great White North. Kevin began work with Alaska Marine Lines and began with Arrowhead LP Gas during its inception, he then worked at Arrowhead for 28 years. He loved his job and the ability it gave him to make connections and friends all over town.

On November 5, 1992 Kevin and Sandy welcomed beautiful twins, Sam and Molly, fulfilling his dream of becoming a father. He was a devoted father who coached, supported, educated, and teased his children into becoming successful, strong-willed adults with great senses of humor; just like their dad.

Kevin was an avid fisherman who could be found most weekends trolling for King Salmon. Filling his family's freezer with delicious seafood was a favorite pastime. He will be deeply missed by his friends, family, and all who knew him. However, the fish in the waters surrounding Mitkof are likely breathing a sigh of relief.

A Memorial Service is scheduled for 2:00 p.m. on June 22 at the Petersburg Lutheran Church. Pastor Eric Olson will officiate. Refreshments will follow in the Holy Cross House. In lieu of flowers, the family asks that donations be made to the Petersburg Medical Center Foundation for their oncology program.