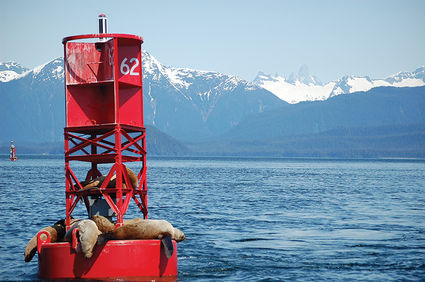 Sea lions hauled out on the "red can" greet every boat passing through the mouth of Wrangell Narrows.

The Stellar Sea Lion population at the WN buoy and the Red Can at Hungry Point has diminished after a pod of approximately 8-10 Orca whales hunted and killed as many as 7-10 sea lions on Friday morning, July 27.

Groups of sea lions traditionally sit atop both buoys throughout much of the year and their barks and growls can often be heard along the beach shoreline.

Katie Eddy was an eyewitness to the event, which started around 5:30 a.m.

According to Eddy, the Orcas swam in circles around the buoy fast enough to generate waves that rocked the buoy, knocking sea lions into the water.