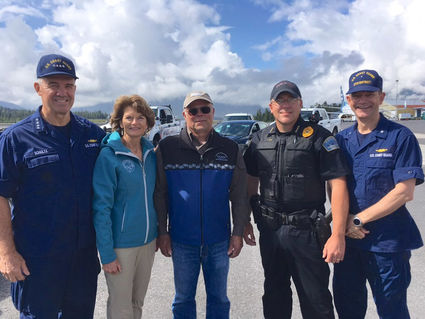 USCG Commandant Karl Schultz, US Senator Lisa Murkowski, Mayor Mark Jensen and Rear Admiral Bell met on the airport tarmac on Friday, Aug. 12 to discuss the Coast Guard's work in Alaska and specifically the needs of the Petersburg fishing community. Police Chief James Kerr was present to provide security for the entourage.

The group gathered on the airport tarmac before Jensen accompanied them on a tour of both the Elderberry and Anacapa before they departed for Kodiak.