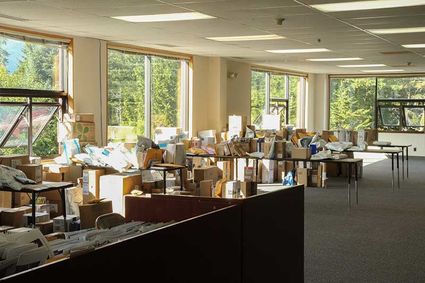 The post office's temporary base of operations at PIA.

United States Postal Service officials now estimate the Petersburg Post Office will reopen on Friday, after a package leaked mercury inside of the facility last week, according to a statement issued by the USPS.

Officials had previously expected the post office to resume normal retail and PO box operations by this past weekend.

“The Postal Service apologizes for the inconvenience and appreciates its customers’ patience,” according to the statement.

Petersburg residents can continue to pick up their mail from 11 A.M. to 5 P.M. at the Petersburg Indian Association at 15 N. 12th St. No retail operations will be conducted, but customers can drop off pre-paid mail and stamped letters, according to the statement. Photo identification is required to pick up mail.

Although the amount of mercury that has been leaked is not considered dangerous, the post office closed the facility to preserve the safety and security of post office employees and customers and the mailstream, according to the statement.