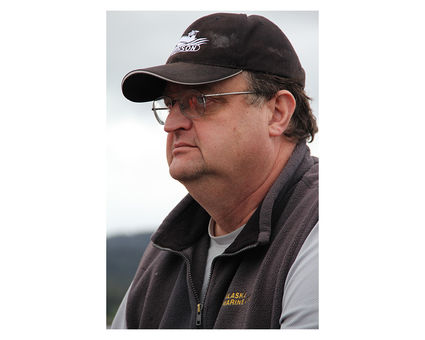 James Christopher Jensen was born in Petersburg, Alaska on March 18, 1954. His parents, Gordon and Helmi Jensen, and his sister Sue welcomed him to his childhood home on Wrangell Avenue, a paradise of kids and dogs and a street where everyone knew what to do with a gaff hook, a krumkaka iron or a basketball. It the 1950s it was the age of radio, the steamship and a community much smaller but as full of life as it is today.

Chris grew up on the family seiner, the Symphony, their longliner Westerly and in the company of lifelong friends, enjoying sports, fishing and hunting.At thirteen he was on the bridge of the first Westerly as she came up the Narrows , having helped his father at the Blaine, WA shipyard where she was built.

At 6'7" they called him "The Tower" on the Viking Basketball Team and on all those Southeast Alaska basketball courts he developed his life long ability to make the shot,and also to pass the ball and give others opportunity. Legendary games include that glorious season when the Vikings beat Juneau for the SE Championship and battled for the state title. Chris graduated from PHS in 1972.

He played a bit of basketball in college and graduated from Willamette University in 1977 in economics.The economics and lifestyle of commercial fishing and the gravitational pull of his home town won out and he went permanently onto the Westerly, having acquired the skill and patience of a longliner from his dad and his Uncle Ben, along with his cousins. He was just starting to take command when an accident sidelined Gordon and Chris stepped up. His career in the Petersburg fleet lasted 50 years. The first Westerly was lost in a storm and he replaced it with the Tani Rae, until he located the perfect hull to refurbish and call the new Westerly. Tendering and longlining, he valued his longtime crew and friends all over SE Alaska and at Icicle Seafoods.

Chris was good to his family. He very much enjoyed traveling to hear classic rock and roll and attended sports events everywhere, supporting the Seahawks and Mariners and missing the Sonics when they left Seattle. His sense of humor enlivened everything. At one point, his good friend and shipmate Mike Wittstock was hospitalized with a no visitors rule. Chris, in scrubs and gloves, brushed by a stunned nurse with, "I'm Dr. Jensen, Mike's proctologist, and he needs to see me right now."

His legacy lies in the powerful support he gave to youth activities in Petersburg, most of it anonymously. His generosity made it possible for local teams to have things like new uniforms, swimmers a new scoreboard, dancers their studio time and the library its Alaska section. Hundreds benefited from his gifts over the years as he believed Petersburg kids should have everything they need to build good lives. Chris was recognized for these efforts with the Norwegian American Award in 2016.

Chris encountered serious health challenges in the last year of his life and succumbed to them September 4, 2018. He leaves his sister Sue Paulsen, his nephew Gordon Paulsen, cousins John Jensen, Mark Jensen, Tom Jensen and their families, and Finnish cousins Linda and Wayne Karjala and Bob Roiko of Grayland, Washington, along with their families, and that of Wally Waara. He also leaves a host of friends, especially Bridget, Kjell and Gillian Wittstock, and a community made better by his life.

A Celebration of Life

will be held Friday, September 14 at 3pm at the Sons of Norway Hall.

Memorials may be sent to The Petersburg Community Foundation.