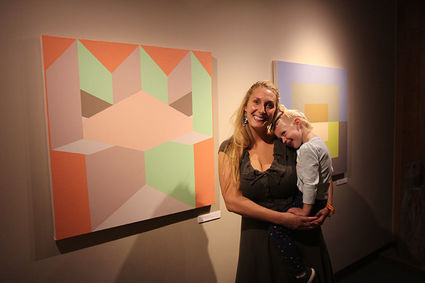 Ashley Lohr, with her daughter Rosie, in front of two of her paintings at a reception on Friday at the Clausen Museum. The painting on the left is titled Squared Balance and the one on the right is titled Reflection.

Local artist Ashley Lohr was featured at a reception at the Clausen Museum on Friday showcasing her solo exhibit Room of Squares, which she has been working on for nearly a year.

"Things can feel out of balance sometimes," said Lohr. "This is my way of practicing some sort of balance."

Lohr's paintings are inspired by color theory and precisionism art. The eight paintings focus on crisp lines, squares and indications of shadowing and light, said Lohr. She was particularly influenced by color theorist and painter Josef Albers, known for his series Homage to the Square. While painting, she c...