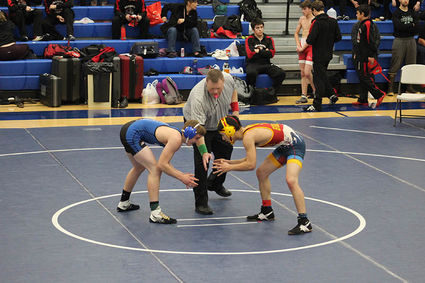 Kayden Geelan, left, begins a match against a Mt. Edgecombe wrestler, on Friday. Geelan won and lost a match on Friday, but won all his matches on Saturday.

Over the weekend, the Petersburg High School wrestling team hosted the first meet of the season with each wrestler placing between second and sixth in their matches on Friday and Saturday.

Josh Coonrad placed sixth on both Friday and Saturday. On Friday he scored three team points and ended the day 0-3. He finished Saturday at 1-2 and scored 5 points for the Vikings.

Reed Anderson placed fifth both days, finishing 0-2 on Friday and 1-2 on Saturday. He scored zero points on both days.

Kayden Geelan came in fifth place on both days...