Volleyball varsity team competes in JIVE, comes in fifth out of ten teams 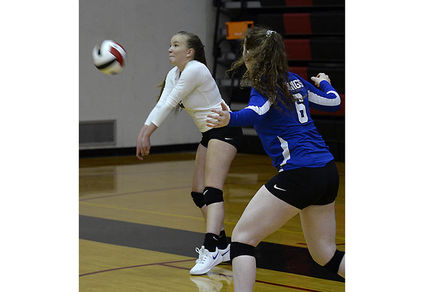 Martha Johnson, left, and Gillian Wittstock, right at the JIVE tournament over the weekend. Both girls are seniors at Petersburg High School and team captains. Johnson made the All-Tournament Team, which is made up of the top player in each of the schools' teams.

The Petersburg High School's varsity volleyball team participated in the Juneau Invitational Volleyball Extravaganza over the weekend, finishing in fifth place out of ten teams.

"Really, really good matches overall during the weekend," said head coach Jaime Cabral. "A lot of court time for the kids. We finished fifth overall by the end of the weekend, which is really good knowing that our team is young and we're getting better every single weekend."

JIVE is a tournament style meet that includes 10 varsity teams throughout Southeast Alaska. First, every team plays each other in a one set mat...