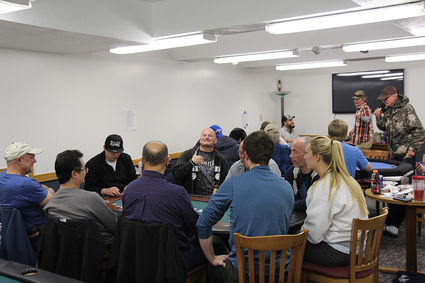 Seth Cox, center, at the fifth annual Annabelle Baker Poker Tournament on Sunday. Cox was one of the first players out of the tournament, but said that he had a great time playing.

Participants in the fifth annual Annabelle Baker Poker Tournament raised $1,500 on Sunday for the Beat the Odds organization, which raises money for support groups and services for local cancer patients.

The tournament was established by Jeigh Stanton Gregor as a way to remember the late Annabelle Baker, who was a competitive poker player.

"Annabelle was a competitor," said Stanton Gregor. "We thought it would be a fun thing to do to remember her."

There were 20 participants total raising $1,500 for the organization. Eugene Lee came in first place in the tournament and won $2,100. This is h...