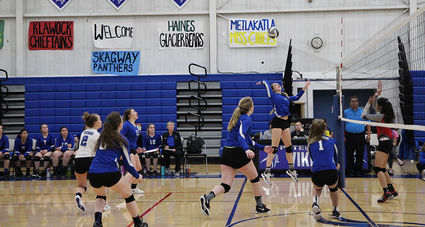 Ali Davis, #3, jumping for the ball at Saturday's volleyball game against Wrangell.

At their second seeding tournament, the Petersburg varsity volleyball team beat four out of six teams over the weekend at home.

"Overall, [I'm] very happy with where we are right now and how much more we get to grow," said head coach Jaime Cabral.