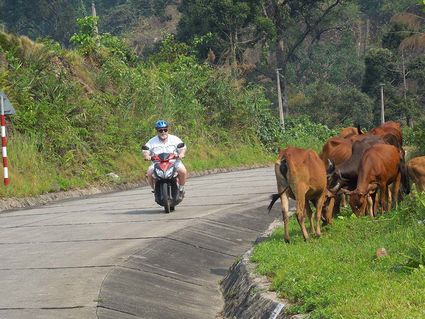 Sam Bunge in Vietnam in 2014. Bunge joined a group of veterans that raised funds and went on to help build schools in hamlets up in the mountains of Vietnam. After the project was completed, the group hired a guide, rented motorcycles and rode around western Vietnam. Though he was deployed in Vietnam for a year, Bunge said he never had the chance to experience Vietnamese culturally. While riding around western Vietnam, Bunge was able to eat at local restaurants and stay at local hotels.

It was clear to Sam Bunge that he was going to Vietnam after he graduated from Johns Hopkins University in Baltimore in 1967. He participated in the university's Reserve Officer Training Corps in preparation because he didn't want to join the United States Army as a private.

"I wanted to have a little bit of control of what happened," said Bunge.

His first year in the army was spent training. He completed his basic training in Fort Indiantown Gap, Pennsylvania. Since he was entering the army as a commissioned office because of his ROTC training, Bunge went on to infantry school at Fort Benn...