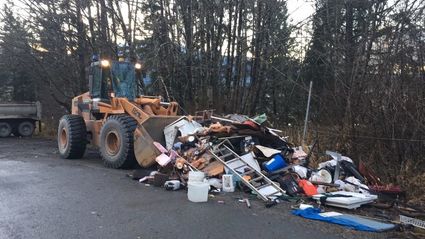 A Department of Transportation front loader picking up the garbage left by Wayne Collins on Mitkof Highway.

On Friday, a camper parked at the 3.8 mile mark of Mitkof Highway was impounded after Wayne Collins, who was in possession of the camper, ignored several warnings from officers to move it.

Multiple officers had seen him throwing garbage on the ground surrounding the camper, which he refused to clean up.

Collins, 58, was cited for littering over five pounds under title 46, according to Officer Louis Waechter who was the responding officer along with Police Chief Jim Kerr.

Collins didn't show up for his hearing on Friday and received a default judgment along with a $1,000 fine. After the ru...