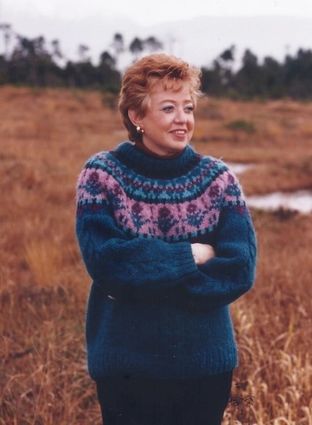 After courageously battling CREST Syndrome, an autoimmune disease, for most of her life. Sherri Lynn (Green) Eide, 68 went to be with Jesus on November 9, 2018 in Salem, Oregon.

She was born June 10, 1950 in Sanger, California, to Jacob (Bud) Green and Pauline (Parker) Green. She later moved to Newport, Oregon with her family, graduated from Newport High School in 1968, and then attended Linn Benton Community College.

As she had an adventurous spirit, Sherri lived and traveled up and down the West Coast with her friends, and eventually landed in Petersburg, Alaska. There she met John Frederick Eide, and they were married on April 15, 1975. Together they owned and fished the gillnetters Meredith E, Sherri Lynn and the Melissa Lynn, and raised two children. She also held various jobs around town, and was shop owner of the Scooter's Corner Ice Cream Parlor. Her greatest joy in life was caring for her family and friends, but especially spoiling her children and grandchildren.

She had a compassionate heart and generous spirit. She opened her heart and home to countless in need throughout her years in Petersburg. She was also faithful in

supporting a child through Compassion International, as well as the churches she attended. She used her passion and skills in music, both as a singer and pianist, to show her love and heart to everyone she encountered. Along with being the church pianist, she led many adult, teen, and children's choirs and programs through the years at Lighthouse Assembly of God in Petersburg.

After her husband's passing, she relocated to Keizer, Oregon, to be closer to family, especially her mother. Even in her own declining health, she felt a great sense of responsibility to care for her aging mother. She attended Salem Evangelical Church, where she joined the choir and enjoyed fellowship with her Sunday School class, which ministered to her through her many health challenges.

Sherri is preceded in death by her husband, John, her father Bud Green and nephew, Scott Updenkelder.

Services will be held at the Lighthouse Assembly of God in Petersburg on Sat., Dec. 29 at 1pm. She will be laid to rest in Petersburg with her husband John.

In lieu of flowers, the family asks that donations be made to either Compassion International or the Scleroderma Foundation in her honor.