Girl's basketball kicks off the season against Metlakatla 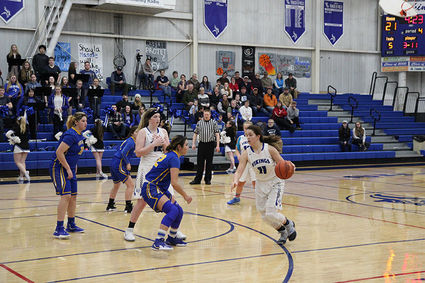 Ines Larson runs the ball back down the court at Saturday's varsity game against Metlakatla.

In their first game of the season, the girl's junior varsity and varsity basketball teams played close games against Metlakatla over the weekend at home.

The varsity team lost both their games, and the JV team won their game on Saturday and lost their Friday game.

"It was a very good weekend for us," said head coach Dino Brock. "It gave us a lot of information of where we are and where we need to be. Metlakatla's competitive and plays hard and I thought that we matched that."

On Friday, the varsity team lost 25-28. By half time, Petersburg had seven points and Metlakatla had eight. Kaili S...